Liquidation of the Warsaw Ghetto Begins 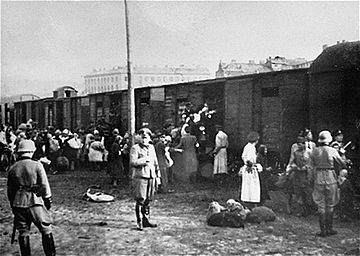 The very first blog I ever posted to this website (here) described the difficulty of grasping the magnitude of suffering encompassed by World War II.  As historian Max Hastings, in the concluding paragraph of his vast history of the war, Inferno, observes, “Among citizens of modern democracies to whom serious hardship and collective peril are unknown, the tribulations that hundreds of millions endured between 1939 and 1945 are almost beyond comprehension.”  Even more so is the tragedy of the Holocaust, which witnessed, as Peter Fritzsche has pointed out in his new book, An Iron Wind, “the willful persecution of people based not on what they had done, but on who they were.”

The human mind is simply not equipped to fathom what 6 million Jewish dead, or 10 million+ total murdered in the camps and elsewhere, means.  So we engage in mental games to better grasp these challenges, one being quantitative comparisons.  This is bigger than that; this went on longer than that; this is farther away than that; this was deadlier than that.

July 22 marks the 75th anniversary of the start of “Gross-Aktion Warschau” or Great Action Warsaw, an eight-week campaign to liquidate part of the Warsaw Ghetto, the largest ghetto in Nazi-occupied Europe.  The official word was that the Jews were being resettled “to the East.”  In fact, all the Jews were shipped directly to Treblinka, a newly constructed extermination camp, where they were gassed immediately upon arrival.

The deportations initially went according to plan—the Nazis’ murderous intentions were as yet unclear.  The Wannsee Conference, which coordinated the start of “the Final Solution,” had occurred only six months prior.  The ghetto inhabitants allowed themselves to be rounded up by the Jewish police.  (Not everyone was fooled—the head of the Jewish Council in the Ghetto, Adam Czerniakow, committed suicide upon being informed of the deportations rather than cooperate.) In another of the many bitter ironies of World War II, it was the same Jewish ghetto police and their families who were put on the final transport (September 21, 1942) which marked the end of the Gross-Aktion.

Only gradually did it finally become evident that there was no resettlement “to the East”; that deportation meant death.  By the end of September 1942, the remaining inhabitants of the Warsaw Ghetto began to take measures, however inadequate, to defend themselves. When next the Nazis entered the Ghetto to begin new deportations (January 1943), they were rebuffed by armed insurgents, ultimately culminating in the Warsaw Uprising (April 19—May 16, 1943).

While the Warsaw Uprising is well known and described in books and film, less attention has been paid to the Gross-Aktion.  Many histories of World War II don’t even mention it.

Which is surprising considering that at least 254,000, and perhaps as many as 300,000, Jews were murdered in that eight-week period.  For comparison sake, that’s more than the total killed in the atomic bombings of Hiroshima and Nagasaki combined. As historian Fritzsche (who makes the foregoing comparison in An Iron Wind), further notes, the Great Action “constituted ‘the greatest slaughter perpetrated within a single city in human history.’”

Max Hastings makes another concluding observation in Inferno which has some applicability to this story: “Within the vast compass of the struggle [i.e., World War II], some individuals scaled summits of courage and nobility, while other plumbed depths of evil, in a fashion that compels the awe of posterity.”

As a side note, the newly appointed Commandant of Treblinka at the time of the Gross-Aktion, Irmfried Eberl, was a psychiatrist—in other words, a doctor by training.  He had earned a reputation running a facility in the so-called T4, or euthanasia, program in Germany (a baffling issue which I’ve discussed here).  Even so, he was dismissed on August 26, 1942 for incompetence—that is, failing to “process,” or dispose of the bodies of the gassed victims quickly and efficiently enough, leading to panic among incoming train passengers.  Captured in 1948, Eberl hanged himself prior to standing trial.

As a further side note, as a sophomore attending Georgetown University in the fall of 1973, I had a class in Comparative Government taught by a professor Jan Karski.  Tall, thin, ramrod straight, Karski was (to me) an intimidating presence, with piercing, icy blue eyes.  I enjoyed the class, as I did most others, although I sometimes had a difficult time understanding his rather thick Polish accent.  Little did I know then that Karski had been a member of the Resistance in World War II, chosen to report to the Polish government-in-exile about Nazi atrocities in occupied Poland.  As Karski writes in his memoir, Story of a Secret State, rather than rely solely on uncorroborated word-of-mouth stories, he agreed in October 1942 to be smuggled into the Warsaw Ghetto “so that I could literally see the spectacle of a people expiring, breathing its last before my eyes.”  Unfortunately, his message, personally related to Foreign Minister Sikorski of the Polish Government and later to President Franklin Roosevelt, fell on disbelieving ears. After he met with Supreme Court Justice Felix Frankfurter, Frankfurter is said to have remarked: “I did not say that he was lying, I said that I could not believe him. There is a difference.”

Karski, who never once mentioned his heroics to our unsuspecting class in 1973, died on July 13, 2000. He was recognized by Yad Vashem as Righteous Among the Nations in 1982, and later named an honorary citizen of Israel.  He truly had “scaled the summits of courage and nobility.”

"Timothy Boyce captivated a larger than usual, attentive and appreciative audience with his spellbinding presentation of Odd Nansen and his World War II diary. He brilliantly demonstrated Odd Nansen’s will to survive while also helping others. A remarkable tale presented in an informative and fascinating way by a truly engaging speaker."