Dunkirk: The Power of Hope 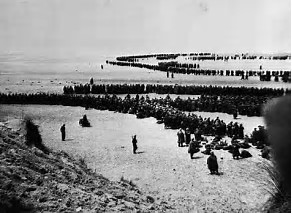 I recently saw, and enjoyed, the movie Dunkirk, written, co-produced and directed by Christopher Nolan.  Surprisingly, it has proven to be both a commercial [$317 million receipts at last count] as well as critical success.  I say surprisingly, since the film about a historical event has no main characters (unless you call the evacuation itself the main character) and is remarkably devoid of much dialogue (but lots of sound effects).  And yet it is very effective at telling the story, as experienced on land, at sea, and in the air.

Coincidentally, I also just finished reading Europe in the Spring [Alfred A. Knopf, 1940] by Clare Boothe Luce (writing under her maiden name, Clare Boothe).  I recently discovered a copy (signed, no less!) at a great used bookstore, Parnassus Book Service, in Yarmouth Port, MA while on a book tour in the area.  Luce, the wife of Henry Luce, publisher of Time, Life, etc., was already a writer of considerable note when she visited Europe in the spring of 1940 to report on conditions while the “phoney war” was underway.  [France and England were at war with Germany, but very little actually fighting was going on.]  All this changed on May 10, 1940, when German armies poured into neutral Holland and Belgium (where Luce had just arrived) and France.  She saw smugness quickly turn to fear, and then to panic, as the Wehrmacht swept all before it (aided, it seems in part, by amphetamines—which I’ve written about here), leading to an astonishingly quick capitulation.  Flying to London on May 31, Luce was thus able to witness at first-hand the Dunkirk evacuation.  Here’s what she wrote about the event:

“The evacuation absorbed every mind, inflamed every heart, monopolized every conversation, in every home and pub and restaurant. . .. No conquering heroes returning heavy-laden with the loot of a rowdy and plunderous war ever received a more royal welcome than England gave her two hundred thousand troops who, driven out of Flanders, returned with nothing but their bare hands. [The actual figure was closer to 340,000 saved.]

[T]he High Commands of both sides were blamed for the long series of stupidities, both at home and in the field, of which the evacuation was the tragic fruit. . ..  But in the end there were and are no words to describe the courage of the plain soldiers, British and French, who took part in it.  The drama of Dunkirk will perhaps never be completely written, although all its horrors and heroisms will provide material for a thousand memoirs and histories [and I’d add: movies] still to be written.”

While waiting for her flight to England, Luce struck up a conversation with a French diplomat returning to his embassy in London.  Despite France’s dire predicament he did not despair, he said.  A survivor of the Battle of Verdun in World War I (almost 1,000,000 combined casualties), he had since that time, he informed her, adopted as his motto: “Il n’y a pas de situations déspérées, il y a seulement des hommes déspérés. (There are no hopeless situations; there are only men who have grown hopeless about them.)”