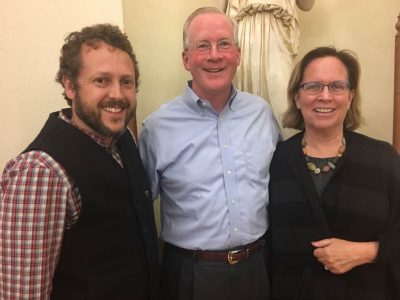 With Wess Daniels of the Friends Center and President Jane Fernandes

On April 25 I had the honor of addressing students, faculty and other interested parties at Hege Library, Guilford College, Greensboro, NC.  Founded in 1837 by the Society of Friends, Guilford College strives to “integrate personal, intellectual, physical and spiritual growth through participation in several rich traditions,” including Quakerism.  According to the school’s Statement of Purpose, the Quaker heritage “stresses spiritual receptivity, candor, integrity, compassion, tolerance, simplicity, equality, and strong concern for social justice and world peace.” Once I had read that, I knew that Odd Nansen’s diary and example would resonate with the audience—he was the living embodiment of all of those attributes.

In my talk I made a point of mentioning two people, Sigrid Helliesen Lund and Myrtle Wright, whose autobiography (Lund) and diary (Wright) I relied on extensively in my research on Odd Nansen and From Day to Day.  Lund, a Norwegian, worked closely with Nansen, beginning in 1936, when she joined the Board of Nansenhjelpen (Nansen Relief), an agency founded by Nansen to alleviate the plight of stateless Jews who were stranded in central Europe.  In late 1942 she was instrumental in smuggling into neutral Sweden many of the same Jews she had helped bring to Norway only a few years earlier.  For this courageous action she was recognized as Righteous Among the Nations by Yad Vashem in 2006, one of only 62 Norwegians so honored.  Although born into a Lutheran family, Lund was an independent spirit; she worked with Quakers during the war and formally joined the Society of Friends in 1947, thereafter becoming active in the Quaker community.  Lund’s autobiography, Always on the Way, was first published in 1982, and translated into English in 2000.

Myrtle Wright was an Englishwoman, and a Quaker, who had the misfortune of arriving in Norway only three days prior to Germany’s invasion on April 9, 1940, and was not allowed to leave Norway for the duration of the war.  Wright spent almost the entire war as Lund’s houseguest (until both were forced to flee for their lives to Sweden in February 1944).  Wright’s diary is an immensely valuable contemporary record of events in Norway during the war (I cite her diary ten times in my Introduction and twenty-nine times in my sources for footnotes).  Wright’s diary, Norwegian Diary: 1940-1945 was published by the Friends Peace and International Relations Committee in 1974.

No story involving Odd Nansen and his diary would be complete without some serendipity and coincidence.  Only after my talk did I learn that Sigrid Lund attended the 1967 World Gathering of Friends held at Guilford College, and that her translator, Kathryn Parke, was a member of the Swannanoa Friends (not far from Asheville, NC).

Thanks to Kate Hood, Outreach Coordinator for the Friends Center, for sharing the news about Lund’s visit, and for showing me the campus (including the ancient poplar tree which silently witnessed the workings of the Underground Railroad, in which the some anti-slavery activists serving on the initial staff of Guilford College’s predecessor, New Garden Boarding School, were heavily involved), C. Wess Daniels, Director of the Friends Center, my host, and President Jane Kelleher Fernandes.  After my talk, President Fernandes wrote:

“Thank you so much for making the visit to Guilford and presenting the honorable life of Odd Nansen.  Your talk struck a chord because of the way it lifted up our College Core Values and its direct relevance to issues of our time.  May we behave in ways that honor the work done before us by individuals like Odd Nansen.  Without your effort, we would never have been able to know Odd Nansen.  With it, we have a history to rely upon as a moral compass for acting with integrity in the face of human rights violations.  May we live up to it!”

May we indeed live up to it.

Finally, special thanks to my friend Dan Mask.  Dan, whose son Dylan attends Guilford, walked up to my author table at a Barnes & Noble in Charlotte, NC in late December, and started asking lots of questions about Nansen, his book, and my motivation in bringing it to print again.  He must have been satisfied with my answers, because he took it upon himself to introduce me to President Fernandes and lobby for an invitation.  Another instance of serendipity! 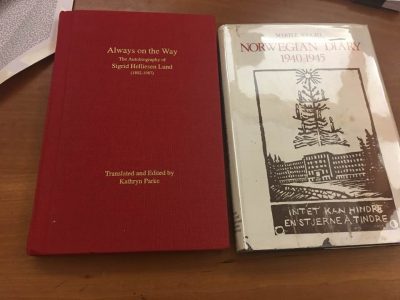